Beak trimming is commonly used to reduce the incidence of feather pecking but this practice will be banned in the whole EU as of 2018. The side effects of non-trimmed beaks is an increased feed intake, as the birds have less plumage to keep them warm. Probiotics can be part of the solution.

‘Probiotics help to prevent and control gastro-intestinal pathogens and/ or improve the performance and productivity of production animals through various mechanisms’, was stated in a recent report of the FAO (2016). Gut health and performance of layers has always been a topic of discussion, but becomes even more important with the future ban on beak trimming. This article describes the latest insights and studies performed with the new registered probiotic* in layers.

A healthy gut ensures optimal nutrient and mineral absorption which is essential for performance, shell quality and food safety of eggs1. The commensal intestinal microbial population assists in feed digestion and can protect the host from pathogen colonisation. These local bacteria compete with pathogenic species for epithelial binding sites and nutrients, positively support the host intestinal immune response and are able to produce metabolites to control the growth of pathogenic bacteria2. Disturbance of the normal intestinal microbiota reduces the innate protective mechanisms and may increase the potential for pathogenic bacteria to bind and colonise in the digestive tract3. Incorporation of viable spores of Bacillus subtilis in avian feed has shown to optimise the intestinal environment for the local beneficial microbes. Resulting in better performance and reduction of pathogenic pressure in the avian gut.

At the end of the rearing period, when the pullet becomes a laying hen, challenging environmental and metabolic changes will occur. Between 15-18 weeks of age, the birds are transported to their new facilities and diet composition will be adapted for the start of laying period. The hens are not yet fully grown when the rapid increase in laying percentage starts, reaching the peak production between 24-26 weeks of age. The main focus of egg producers and nutritionist is the nutritional support of the young hens in the early stage of production until approximately 30 weeks of age. Probiotics could be a supportive nutritional tool during peak performance, a high productive period where the hens are also more sensitive for microbial disorders in their digestive tract. A probiotic* was tested in 120 Tetra SL Laying hens in the first period of production between 19 to 42 weeks of age. The addition of 3 x 108CFU Bacillus subtilis C-3102 per kg feed resulted in a faster increase of egg weight, higher egg mass and better utilisation of the feed (Figure 1 a-c). Reduced hen weight could reflect the mobilisation of body reserves for egg production. However, similar feed intake and improved performance did not negatively influence live hen weight in the probiotic group. Additionally, larger eggs did not result in thinner egg shells and poorer shell quality. An average of 0.52% of egg disorders was already low for the control group, but even numerically lower for the probiotic group with 0.37% over the 24 week period. 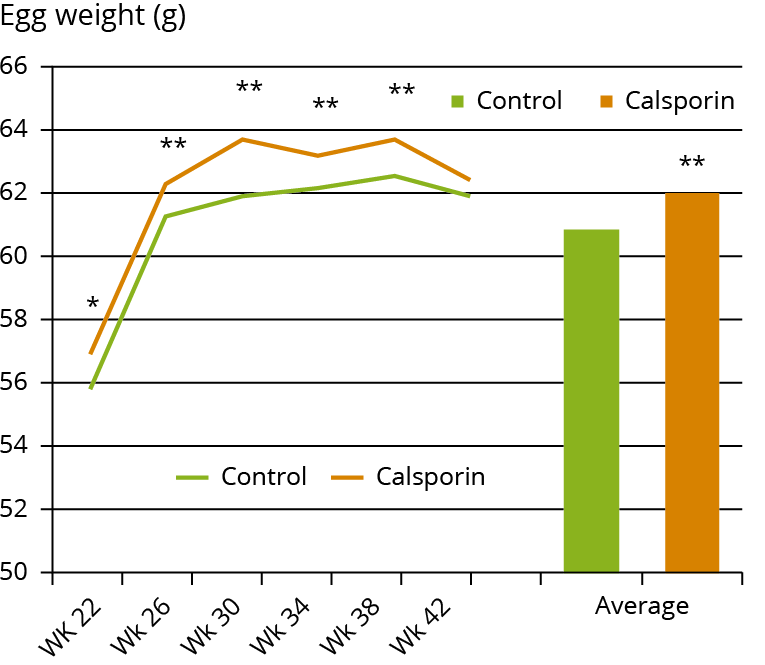 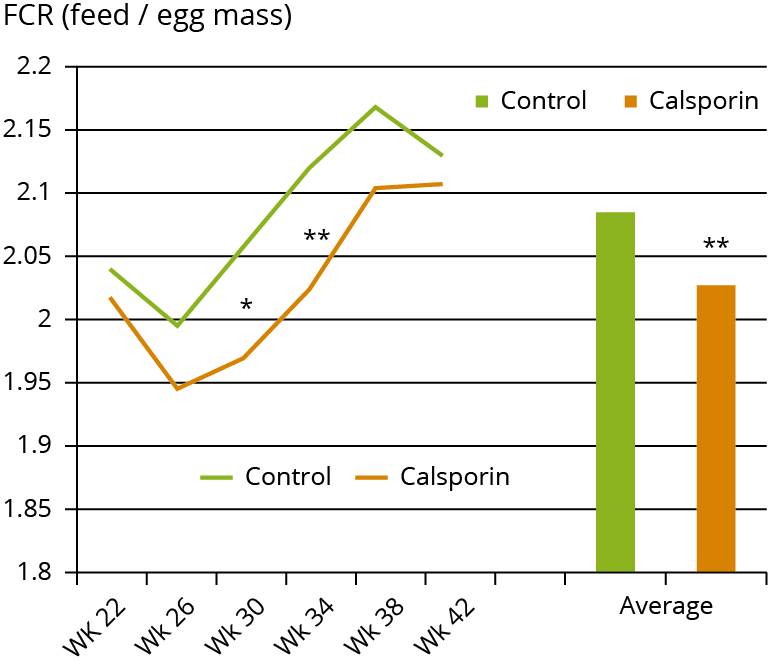 Optimal feeding of layers enables egg producers to prolong the laying period till 100 weeks of age. Maintaining egg laying performance and egg shell quality are key for a long productive life. In a second study with 120 brown Tetra SL laying hens, the addition of 3 x 108 CFU Bacillus subtilis C-3102 per kg complete feed was tested for a period of one year, from 19 to 70 weeks of age. Inclusion of the probiotic resulted in improved laying rate, egg weight, egg mass and feed conversion over the whole period. Larger eggs (Figure 2) and similar feed intake did not result in reduced hen weight in the probiotic group, in line with the results in the first trial. Improved performance could be explained by a better feed utilisation by the hens, as it was shown that the apparent digestibility of protein, fibre and ash was significantly higher in the Calsporin group measured at 70 weeks of age. The hens receiving B. subtilis in their feed had a persistent higher egg weight over the whole laying period compared to the control group (Figure 2). In practice, increase in egg size is negatively correlated with shell quality. However, the trial results showed that larger eggs did not result in differences in shell thickness and shell density. Meanwhile, breaking strength was even numerically higher and the amount of egg disorders (cracked, dirty, misshapen and unsaleable eggs) was significantly lower in the probiotic group, with 0.64% and 0.46% of the control and probiotic group respectively.

Laying hen performance can easily be disturbed by the emergence of an intestinal pathogen. Changes in feed intake, colour and composition of the faecal droplets and liveability of the flock are the first signs that something is happening. Disruption of the intestinal microflora causes increased susceptibility of hens to Clostridium perfringens, avian pathogenic Escherichia coli, Salmonella spp. and Campylobacter spp. The latest three bacterial strains are also associated with food safety and zoonotic diseases2,4. Laying hen farmers have limited possibilities for the use of antimicrobial products due to withdrawal times for eggs. The administration of B. subtilis to laying hen feed can be a safe and practical option, as numerous trial results have shown a reduction or even exclusion on the most common pathogens like Clostridium perfringens, Salmonella, E.coli and Campylobacter5-11.

Feather pecking in laying hens remains an important economic and welfare issue. Pecking, pulling out and eating of feathers by hens results in the loss of feathers on the back, vent and tail area of their victims. In more severe cases it can be followed in a form of cannibalistic pecking where hens peck continuously on the skin, leading to wounds12. Feather pecking results in poor plumage conditions, higher feed intake and is correlated to higher mortality13,14. Beak trimming is commonly used to reduce the incidence of feather pecking and the associated cannibalistic behaviour in hens14. In certain European countries beak trimming is already prohibited, in the near future also other countries (e.g. Germany, the Netherlands) will follow and finally beak trimming will be banned in the EU from September 1st, 2018. Feather pecking is a multifactorial problem, alternatives for beak trimming have to be found in a combination of environmental changes, fearfulness (early life experiences), genetics and nutrition13,15. Recently Schothorst Feed Research investigated the effect of non-beak trimming on performance and welfare of Dekalb-White laying hens from 17 to 68 weeks of age. The group with non-trimmed beaks showed an increasing feed intake over the whole trial period compared to the control group with trimmed beaks. Higher feed intake of 3 gram/ hen/ day was already seen at the start and reached a maximum of 17 gram/ hen /day at the final part of the trial period. The untreated group showed more signs of stress, had higher mortality rate and an increased energy intake. Higher feed intake of the untreated hens was not solely used for higher egg production, but seems to be correlated with the poor plumage conditions already seen at 32 weeks of age. The additional energy uptake appear to be used to fulfil their increased maintenance requirements, explained by a higher demand for energy to maintain body temperature and plumage recovery16.

From nutritional point of view, stimulating feeding and foraging behaviour plays an important role in controlling feather pecking. Diluting the diet increases the feeding time of the birds, for instance by adding insoluble fibre12. Fibre has a positive effect on gut motility and satiety. Besides the addition of fibre to the feed, it is also common to put small alfalfa bales in the stables to promote fibre intake and foraging behaviour12. A healthy gut microbiota is essential to control feather pecking. Dietary deficiencies stimulate explorative behaviour and may increase feather eating and pecking activities12,13. Normally, diet composition is adapted to the laying hen requirements. A mismatch between diet composition and hen requirements can easily appear when the need for energy increases to compensate poor plumage condition16 and/ or when pathogens dominate the gut and increases demand for specific nutrients. Increased stress levels due to feather pecking is a predisposing factor for changes in the gut microflora, resulting in alternation of the normal, protective microbiota and suppression of the immune system3,17. Making the birds more sensitive for pathogenic infections. Probiotics can help to promote a healthy intestinal microbial population, control gastro-intestinal pathogens and support in the performance and productivity of the non-trimmed laying hens in future.

*Calsporin, Bacillus subtilis C-3102 (recently approved by the European Commission as a probiotic for laying hens).

References 1-17 are available on request.