In a recent study published in Poultry Science, researchers tried to answer the above question by comparing broiler growth performance and meat quality with the 2 forms of betaine: anhydrous betaine and hydrochloride betaine.

Betaine is mainly available as a feed additive in a chemically purified form. The most popular forms of feed-grade betaine are anhydrous betaine and hydrochloride betaine. With the increasing consumption of chicken meat, intensive farming methods have been introduced into broiler production to improve productivity. However, this intensive production may have negative effects on broilers, such as poor welfare and reduced meat quality.

The corresponding contradiction is that improving living standards means that consumers expect better tasting and better quality meat products. Therefore, a variety of nutritional strategies have been tried to improve the meat quality of broilers in which betaine has received considerable attention due to its nutritional and physiological functions.

Common sources of betaine are sugar beets and their by-products, such as molasses. Nevertheless, betaine is also available as a feed additive with the most popular forms of feed-grade betaine being anhydrous betaine and hydrochloride betaine.

This study set out to investigate the effect of 2 forms of betaine (anhydrous betaine and hydrochloride betaine) on the growth performance, meat quality and antioxidant capacity of broilers. A total of 400 newly-hatched male broiler chicks were randomly divided into 5 groups and fed 5 diets during a 52-day feeding trial. 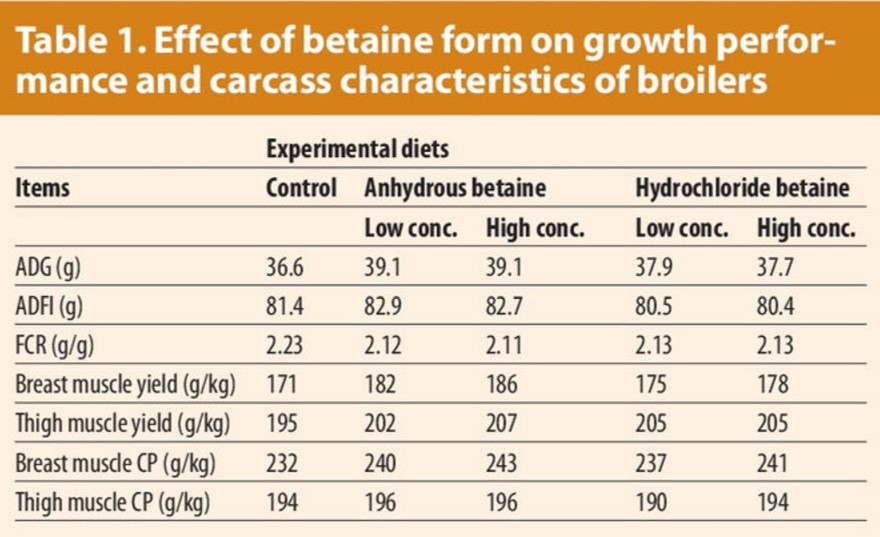 In this study, the diet supplemented with high dose anhydrous betaine significantly improved weight gain, feed intake, decreased the FCR and increased the breast and thigh muscle yield when compared to both the control and the hydrochloride betaine groups. The increase in growth performance was also associated with increases in protein deposition observed in breast muscle: High-dose anhydrous betaine significantly increased (by 4.7%) crude protein content in breast muscle while the high-dose hydrochloride betaine numerically increased breast muscle crude protein content (by 3.9%).

It was suggested that this effect may be because betaine can take part in the methionine cycle to spare methionine by acting as a methyl donor, thus more methionine can be used for muscle protein synthesis. The same attribution was also given to betaine’s role in regulating myogenic gene expression and the insulin-like growth factor-1 signalling pathway that favours an increase in muscle protein deposition.

In addition to sensory attributes (colour, juiciness and flavour), the quality of meat is reflected in its physico-chemical parameters, such as water holding capacity, texture, nutrient composition, and oxidative status.

Increased water retention of muscle tissue may be attributed to the osmotic capacity of betaine. As an important organic osmolyte, betaine can protect the cell against dehydration and increase water retention to maintain water balance. Anhydrous betaine shows greater solubility in water than hydrochloride betaine, thereby increasing its osmotic capacity. This might be the reason why in this study broilers fed anhydrous betaine had lower drip loss in breast muscle than those fed hydrochloride betaine. 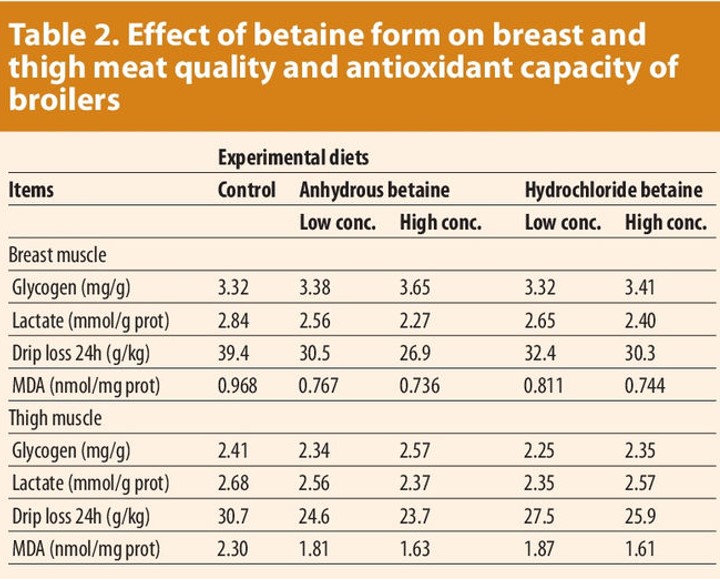 In this study, a diet supplemented with high-dose anhydrous betaine significantly decreased lactate content in breast muscle. Lactic acid accumulation is the main reason for the muscle pH decrease after slaughter. The higher breast muscle pH with high-dose betaine supplementation in this study suggested that betaine could affect muscle post-mortem glycolysis to mitigate lactate accumulation and protein denaturation, which in turn decreases the drip loss.

Meat oxidation, especially lipid peroxidation, is an important reason for meat quality deterioration which reduces nutritive value while causing texture problems. In this study a diet supplemented with high-dose betaine significantly decreased the content of MDA in breast and thigh muscles, indicating that betaine could alleviate oxidative damage.

The mRNA expressions of antioxidant genes (Nrf2 and HO-1) were more upregulated in the anhydrous betaine group than with the hydrochloride betaine diet, corresponding to a greater improvement in muscle antioxidant capacity.

Role of betaine in layer production