Yeast’s potential as an AGP alternative

The growing number of countries banning the use of antibiotic growth promoters (AGPs) continues to generate strong demand for alternatives to help minimise the negative impact of bacterial diseases. The economic losses of such diseases can be substantial, including not only reductions in bird performance, but also increased treatment costs and potentially greater mortality.

The impact of the AGP ban has been greatest in countries without adequate routine hygiene practices in place, where birds are typically already performing below their genetic potential. Yet even within the UK there were reports that outbreaks of cholangeohepatitis in broilers increased following the European Union (EU) AGP ban in the mid-2000s. One of the greatest current threats to all poultry flocks comes from necrotic enteritis caused by Clostridium perfringens.

The pressure for the rest of the world to introduce AGP bans of their own also continues, as concerns regarding the resistance of certain pathogenic bacteria to existing antibiotics grow stronger. As a result, global interest in AGP alternatives is rising, and looks set to increase considerably during the coming years.

The majority of the alternatives to AGPs on the market target the gut microflora, feed digestion and intestinal health. These supplements include various acidifiers, enzymes, probiotics, prebiotics and plant extracts, all of which act in some way to promote beneficial conditions and microbial populations within the intestinal tract at the expense of those that are pathogenic.

In addition, it is now widely recognised that the intestinal microflora can influence the structural and functional development of the mucosal immune system, thereby enabling such AGP alternatives to also potentially enhance the bird’s immune function, albeit indirectly. With many of the bacterial pathogens of commercial importance within the poultry industry entering the bird via the gut, any such enhancement is of clear benefit.

However, the bird can also be infected by other routes, such as via the respiratory tract. For example, inhalation of Pasturella spp. bacteria can lead to mycoplasma infection or fowl cholera. In addition, poultry are susceptible to a range of viral infections that can have substantial economic consequences, such as losses as high as US$ 4,222 per 1,000 birds in breeder flocks and US$ 266 per 1,000 birds in broilers, due to infectious bronchitis.

As a result, evidence that certain compounds within Saccharomyces cerevisiae yeast can directly stimulate the entire immune system is currently receiving considerable attention. Not only would this enhance the efficacy of immune response to all pathogenic bacterial challenges, regardless of source, but by increasing the immune system’s response to vaccines it could also indirectly raise the bird’s ability to ward off viral infections.

In one 28-day trial involving broilers inoculated with both a coccidial challenge (Eimeria spp.) and C. perfringens, the use of S. cerevisiae beta-glucans significantly improved feed conversion ratio compared to the untreated control group (1.65 vs 1.81), and close to that achieved using a commercial AGP (1.60).

Supplements derived from S. cerevisiae are already in use as pre- and probiotics within the poultry sector, so the opportunity to also achieve a direct bacterial immune response, as well as a potential indirect viral immune response, only adds to its value as a source of material for use in AGP alternatives. However, to fully appreciate the potential role that S. cerevisiae has to play, it is important to understand the mechanisms by which it exerts its various effects.

Critical to the efficacy of the beta-glucans in stimulating an immune response is their physical structure, which differs considerably from one source to the next. The beta-glucans derived from plant cell walls, for example, consist primarily of glucose molecules linked linearly, with little or no side chains. Not only is the presence of side chains in S. cerevisiae beta-glucans important to generating the required response, but so too is the frequency and length of these branches. The length of the glucose backbone, the purity of the beta-glucans and the particle size also appear critical.

The beta-glucans exert their effect by reacting with elements of the immune system such as macrophages following absorption into the epithelium of the gut. This triggers a cascade of activation events, leading to an overall increase in immune activity that is then available to more effectively tackle pathogens, including those introduced as vaccines.

Figure 1 – Percentage of Salmonella enteriditis positive livers and spleens (L/S) in a trial to evaluate the effect of S. cerevisiae beta-glucans on immune response in 150 day old broilers. 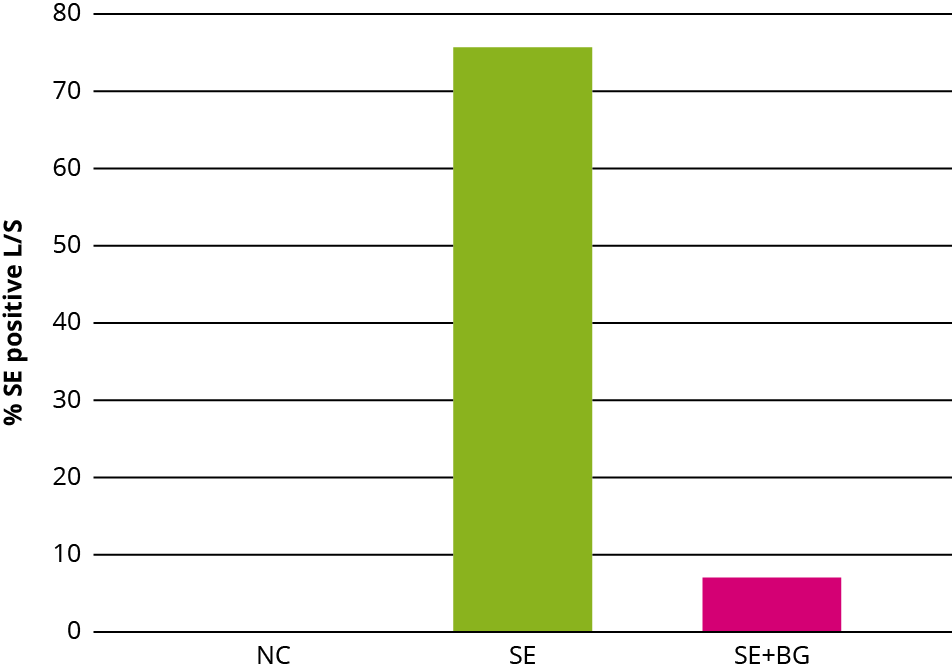 The addition of the beta-glucans reduced contamination from 76% to just 7%. Furthermore, concerns regarding the potential energy cost of such an enhanced immune response, and the possible impact on bird performance, have proven unfounded.

Yeast MOS positively influences the microbiome by acting as a nutrient source for beneficial species of gut microbes, such as Bifidobacterium and Lactobacilli, at the expense of pathogenic organisms, including Salmonella, Escherichia coli and Clostridium.

Figure 2 – Effect of S. cerevisiae mannam-oligosaccharides (MOS) on the in vitro growth of

In addition, the gut environment is enhanced and gut wall integrity improved by an increase in the production of lactic and butyric acids by the beneficial microbes, whilst the MOS itself can also bind with pathogenic bacteria. The net result is a substantial reduction in the ability of pathogenic bacterial populations to grow (see Figure 2) and subsequently enter into the bird’s bloodstream.

There is increasing evidence of further benefit to using S. cerevisiae MOS, in the form of an indirect impact on the bird’s immune system. This occurs as a result of the complex interactions that take place between the microbes within the gut and the intestinal epithelial cells, leading to stimulation of key elements within the intestinal immune system, such as T-cells and immunoglobulins. Finally, MOS has certain mycotoxin binding properties, with many mycotoxins, including aflatoxin, trichothecenes, ochratoxin A, implicated in reducing immune function.

Similar benefits are seen when the whole S. cerevisiae yeast organism is applied as a probiotic. The MOS in the cell wall is still able to bind with pathogens and toxins within the digestive tract, whilst the metabolic activity of the yeast itself improves conditions within the GIT by scavenging any oxygen present, thereby suppressing aerobic pathogenic organisms whilst also benefiting beneficial bacteria. In addition, S. cerevisiae has been shown to degrade the mycotoxin zearalenone into the less toxic beta-zearalenol. The overall potential impact of yeasts such as S. cerevisiae is therefore considerable, offering an opportunity to both directly tackle the increased bacterial challenge faced when AGPs are removed from the diet, and to enhance all aspects of bird immune response.

An in-depth look into poultry pathology

Value of Member State schemes under the spotlight