Research at the University of Norway is helping to address the return on investment (ROI) question of feed additive blends. The commercial marketplace has seen several different classes of additive blends formulated to help broilers manage a broad spectrum of challenges without antibiotics. As ingredients in these blends are often costly, producers question whether a performance improvement delivers value that exceeds the cost of the additive.

Considering whether to introduce a feed additive blend into the broiler diet raises many questions for poultry producers. How will the blend benefit the flocks’ performance? How effective will a feed additive blend be in terms of delivering the desired health and performance benefits? What makes this blend different from all the other options on the market? But, above and beyond all of these considerations, there is usually one question that remains uppermost in poultry producers’ minds: Is it worth it? In other words, do the benefits outweigh the financial cost of including a feed additive blend in the diet?

In a study involving more than 7,000 broiler chickens challenged with Eimeria, scientists evaluated seven different feed additive blends at Scandinavian Poultry Research in Våler, Hedmark, Norway. The performance of bird groups receiving each blend was compared with each other and to a control group receiving no blend. Beyond zootechnical performance, researchers analysed the results from a financial point of view. 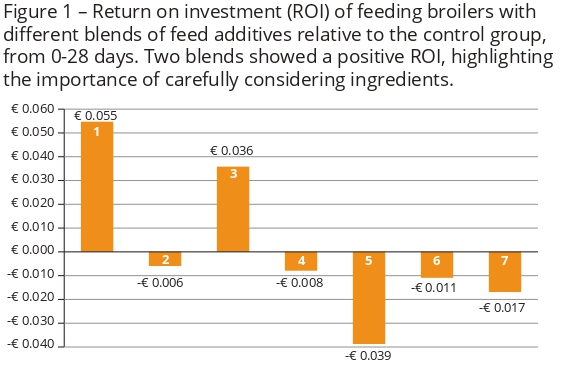 What did they find when considering the nutritional ROI? Only 2 of the 7 feed additive solutions tested showed a positive added value per broiler. Five of the feed additives did not deliver a value that compensated for the cost of including the feed additive solution. The highest added value per broiler compared to the negative control group was for Selko Presan-FY, which delivered an added value of € 0.055 per bird compared to the control group (Figure 1). The zootechnical performance aspects considered in the economic analysis included body weight gain (BWG) and feed conversion ratio (FCR).

Different ingredients, of course, target different performance benefits and the study findings raise an important question – what is the right combination of ingredients to unlock performance? Traditionally, research has focused on the efficacy of individual ingredients. As scientists learn more about the strong association between production performance, intestinal microbiota and its integrity, so there has been more focus on how different ingredients support contributors to gut health.

For example, scientists are considering the effects of dietary blends on morphological changes of the intestines, immunomodulatory effects and gut barrier function. Given the complex challenges birds face, a broad-spectrum, synergistic blend of feed additives included in the diet aims to deliver multiple modes of action.

As can be seen in the descriptions of each blend, today’s feed additive blends include a wide range of substances. Looking at Blend 1 that delivered performance improvements contributing to a positive ROI, ingredients included organic acids with high pKa, MCFAs and alkyl ester of C12 to reduce total bacterial counts and improve microbial diversity of the microbiome. The blend also includes target release butyrates and capsicum extract which are known to support gut integrity by supporting tight junction build-up and increasing villi length. Blend 3 was the only other blend also to deliver a positive ROI.

Nutritional strategies including the use of blends should also take into account broilers’ developmental challenges. Considering that development of the birds’ microbiome largely occurs in the first two weeks of life, the study in Norway included two phases – an unchallenged phase from 0 to 14 days and a challenged phase from day 14 to day 28. Blend 1 demonstrated an improvement in both BWG and FCR during the first two weeks of life, confirming that ingredients supporting a healthy microbiota play a role in helping the bird build a strong and resilient microbiome, enabling efficient production performance. Other research has demonstrated that using a broad-spectrum feed additive can be beneficial when managing severe first-week health challenges.

Sometimes research yields unexpected insights. The objective of the study was to consider how Blend 1 performed against other popular blends of feed additive in broilers reared without antibiotics or coccidiostats. However, when the researchers looked at the zootechnical performance improvements from an economic perspective, it became clear that carefully selected blends can support not only birds but producers as well.

As regulatory controls and consumer demand continue to drive reductions and even the elimination of antibiotics in production practices, these findings demonstrate that improved performance does not have to mean diminished profitability. Feed additive blends that deliver a broad-spectrum approach can both defend against real-world production challenges and support production economics.