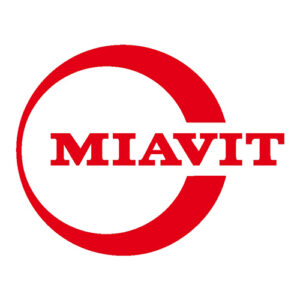 Zinc is an essential trace element and influences the cellular growth and development of the organism in many ways. An undersupply of zinc quickly leads to deficiency symptoms. For this reason, zinc is always added to feedstuffs to cover requirements.

In the EU, the maximum amount of zinc allowed in feed is 120 ppm zinc for poultry (native content plus additive). If the zinc content in the feed is too high, the element is excreted in the faeces. Zinc is a heavy metal which can accumulate in the environment.

Traditionally, zinc supplementation is done by adding zinc oxide, zinc sulphate or as protein or amino acid chelate. Recommendations from various institutions vary considerably and range from 40 ppm to 110 ppm of added zinc. The source of zinc is rarely specified.

The general consensus is that zinc availability increases in the order: zinc oxide < zinc sulphate < zinc chelate. The goal in zinc supply should be to release zinc ions in the small intestine, the place where they are absorbed by the animal. Zinc sulphate and zinc oxide already dissolve in the aqueous acidic environment of the stomach and release zinc ions there.

However, the gizzard is not the site of absorption. With changing pH values, free zinc ions can also form new complexes with other nutrients, like phytates, reducing their availability. The aim therefore must be to let the zinc ions pass through the gizzard intact so that they are only released in the small intestine.

At the Bingen Technical University of Applied Sciences in Germany, the use of such a protected zinc source (MiaTrace Zn, Miavit GmbH) was tested in male broilers of the ROSS 308 breed. Two groups were compared, each consisting of 40 animals in 20 replicates. The control group was supplied with 80 ppm zinc sulphate, whereas the experimental group was supplied with the same amount of zinc from the protected zinc source. The animals were caged, the fattening period was 35 days and the diets differed only in terms of the zinc source.

As shown in Table 1, performance parameters were positively influenced. Table 2 shows that the animals from the experimental group had comparatively heavier bones which were also significantly longer. The tibia bones of the animals from the experimental group tended to be better mineralised (with more phosphorus, more calcium and more zinc) which, altogether, led to a significantly higher breaking strength of the bones (Figure 1).

In a second experimental set-up at the Free University of Berlin, Germany, the approach was to reduce the zinc supplement to a minimum. Thus, the trial had 3 variants each with 80 animals allocated in 8 replicates. Male day-old chicks of the COBB 500 breed were housed in floor housing and the fattening period was 35 days. 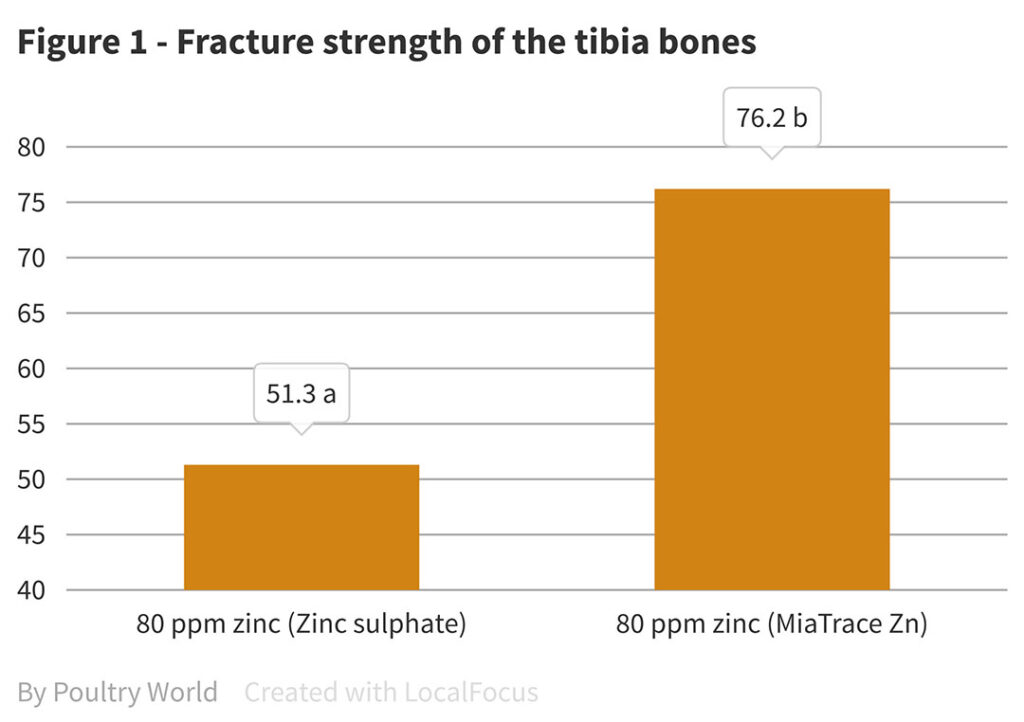 From the insoluble zinc fraction analysed, it was clear that significantly less insoluble zinc is found in the digesta when the protected zinc source is added, compared to the addition of 80 ppm zinc sulphate. No differences were observed in this respect compared to the group with the addition of 40 ppm zinc from zinc sulphate. Insoluble zinc is the fraction in the digesta that cannot be used by the body for metabolism and is excreted.

Thus, when using the protected zinc source just as much soluble zinc can be provided as when administering 80 ppm zinc from zinc sulphate, even though the amount of zinc is reduced by 50%. The amount of the insoluble zinc fraction is significantly lower and thus less zinc is excreted unused. Apparent ileal digestibility was better in the protected zinc group compared to the other 2 groups. Measured zinc levels in the blood plasma of the animals were also highest in the group fed protected zinc. 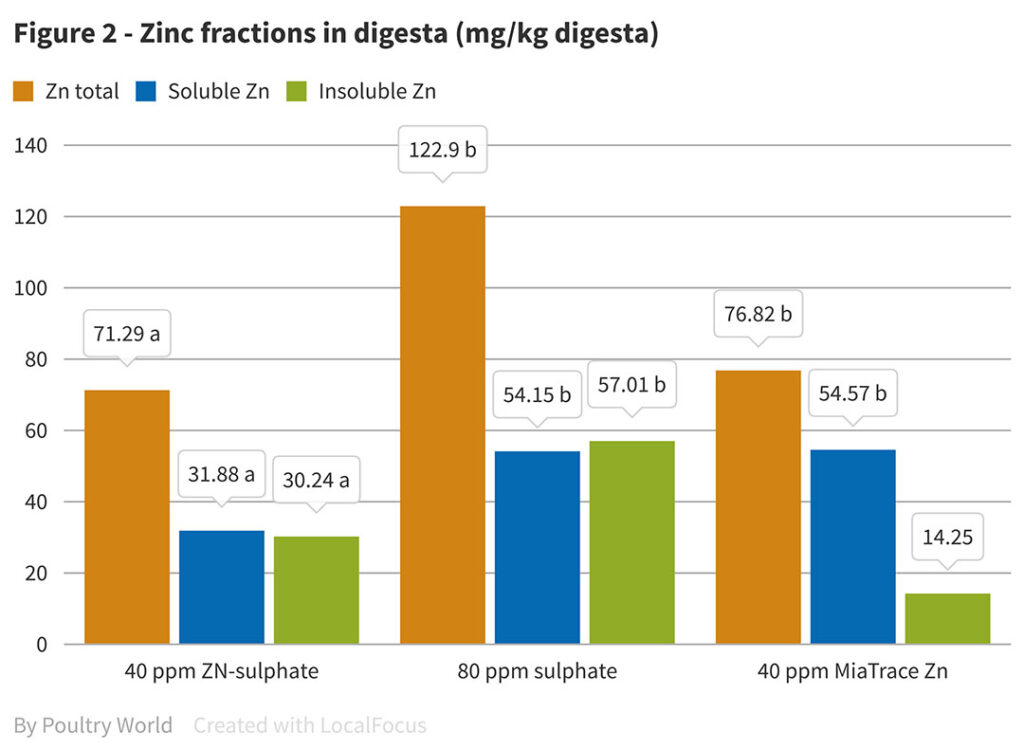 As zinc can affect gut health, differences in apparent ileal digestibility of crude protein between the 3 groups were used as an indicator of gut health. Again, the group fed 40 ppm zinc from a protected source showed the best protein digestibility.

MiaTrace Zn improves performance. Feed intake was numerically higher than in the 2 control groups over the entire fattening period and thus at the same level. Daily gains were higher in the experimental group and the feed conversion rate improved. In terms of performance data, the animals in the group fed protected zinc were about 55 g heavier at the end of fattening compared to the 2 groups fed conventional zinc sulphate.

The results from both trials show the superiority and positive effects of a stomach-protected zinc source (MiaTrace Zn; Miavit GmbH) on the zinc status and animal performance of broilers compared to zinc sulphate. Reduced interactions with components of the feed slurry, as well as a targeted release of zinc ions enable lower zinc levels to be used in the feed while at the same time ensuring that the animals’ requirements are met. The fact that the zinc can pass through the gizzard intact means that the zinc is used more effectively and other nutrients are absorbed.

The Miavit GmbH, headquartered in Essen Oldb., was founded in 1964 and is now already in third generation. The guiding principle of our family business then as now is called “prevention instead of medication”. The name Miavit is an abbreviation for all important minerals, amino acids and vitamins that are contained in our pre-mixtures. As a competent partner in the fields of feed additives, minerals and vitamins, we offer a high-quality and diverse range of products both in powdered form and in pastes and liquid variants.

The Miavit GmbH, headquartered in Essen Oldb., was founded in 1964 and is now already in third generation. The guiding principle of our family business then as now is called “prevention instead of medication”. The name Miavit is an abbreviation for all important minerals, amino acids and vitamins that are contained in our pre-mixtures. As a competent partner in the fields of feed additives, minerals and vitamins, we offer a high-quality and diverse range of products both in powdered form and in pastes and liquid variants.