The number of laying hens in the European Union increased by 1% in 2021. Existing and new farms are steadily shifting to non-cage systems under legislative pressure and the weight of public opinion.

The European Commission publishes annual statistics on the number of laying hens and the farming systems used in the now 27 member states of the EU (which excludes the UK since Brexit). Every country is obliged to pass on its national data to the block’s statisticians in the framework of EC regulations. The question is whether every country implements this in the same way and with the same level of rigor. However, the figures show certain trends in the number of birds, as well as shifts in farming systems in the EU and the various countries.

Some important trends compared to 2020 can be extracted:

• The total laying hen population in the EU has increased slightly compared to 2020. In 2021, there were 376 million laying hens in the EU (372.4 million in 2020) or an increase of 1%. Table 1 shows the 6 largest egg-producing countries in the EU (including Belgium) and their farming systems.

• An increase in the number of laying hens compared to 2020 is seen mainly in Germany (+1.8 million) and Poland (+1 million). It is noteworthy that the data from France in the European Commission statistics is still that from 2019.

• A decrease in the laying hen stock in 2020 among the larger producers in the EU is reported only for Italy (-0.5 million). In Belgium the number of laying hens is expected to have increased by 0.1 million by 2020.

• Germany remains the largest egg producer (58.1 million birds) in the EU, followed by Poland, France, Spain and Italy, who all have between 40 and 51 million laying hens.

• The decline from enriched cage housing to non-cage housing is continuing and amounted to approximately 3.1% in 2021. This trend, with an annual decline in cage housing of over 2%, has been evident for several years. In 2018, more than half (50.4%) of layers were housed in cage systems. There is, however, also a Brexit effect as the data for 2020 still includes the figures from the UK. A country known for its high percentage (>50%) of free range.

• Remarkable is the decrease in the number of layers in non-cage systems in Italy, traditionally a ‘cage’ country. By 2021, 54.5% of its laying hens were already kept in aviary systems (+5% compared to 2020). 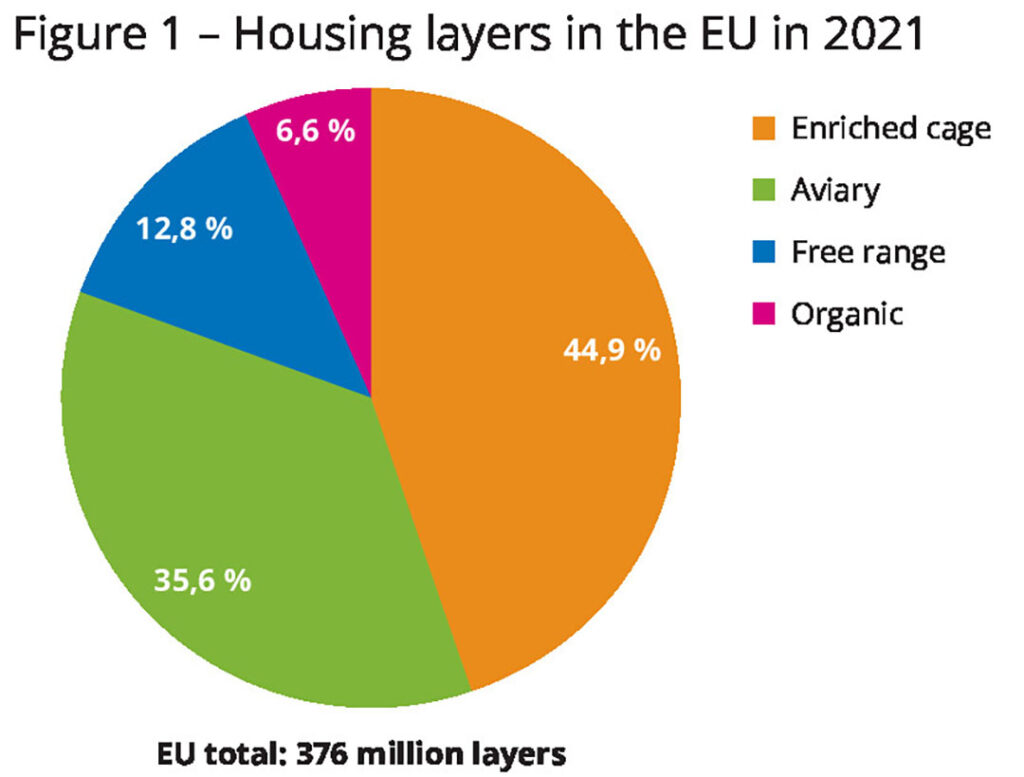 • It is well known that there are major differences between North and South within Europe. Predominantly cage housing (>50%) is still the norm in Poland, Spain, Portugal, Hungary, the Czech Republic, Slovakia and Bulgaria, and elsewhere. Aviary housing, on the other hand, is predominantly used (>55%) in Germany and the Netherlands. Enriched cages are hardly found in Germany (5.5% of its birds) and limited in the Netherlands (7.8%), Denmark (9.9%) and Sweden (5.5%), and in Austria they have already been completely banned.

• Sweden leads the way in organic (14.3% of its laying hens), followed by Germany (13.6% of its hens) and France (11.2%) among the major producers. While in Denmark this is 33% and in Austria 12.9% of the laying hen stock. In Belgium, production based on organic standards is increasing every year and already amounts to 7.4% of the total laying hen stock.