As the capacity for large-scale poultry operations has grown in the MENA region, so has the demand for animal feed, for which corn is a main ingredient. What more is happening in this growing region?

Over the next 10 years, growth in worldwide demand for crops and animal products is expected to occur primarily in developing and emerging economies. With expanding populations, rapid urbanisation, and rising incomes, diets in low- and middle-income countries are gaining calories not only from increased consumption of staple grains and oilseeds, but also from diversification toward beef and poultry (Trostle and Seeley, 2013).

Rising consumption in many of these countries, however, is outpacing their ability to produce, with consequences for production and trade by agricultural exporters such as the United States. Among the most important destinations for agricultural exports is the Middle East and North Africa (MENA) region (Figure 1). MENA’s shares of growth in total world imports of corn and wheat are 23% and 44%, respectively, and for poultry and beef, the shares are 31% and 30%, respectively. For these commodities and many others, MENA represents an increasingly important market for agricultural exporters, including the United States.

Like many developing and emerging economies, the MENA region is experiencing population and income growth. Home to nearly 500 million inhabitants—the most populous countries are Egypt, Turkey, and Iran—MENA’s population is growing faster than almost anywhere else in the world. Similarly, incomes are generally growing, but this masks considerable variability across the countries of the region. Incomes in the wealthy, oil-rich states of the Persian Gulf contrast starkly with resource-scarce countries such as Egypt, Morocco, and Yemen, where a sizeable fraction of the population lives in poverty.

MENA’s income and population growth rates are projected to exceed the world’s growth rates over the next 10 years. Against this backdrop of population growth and mixed economic performance, recent political instability in some parts of MENA, coupled with rising and volatile international agricultural commodity prices, have caused the region’s food imports to fluctuate and left some governments struggling to subsidize basic food staples. These developments have not only complicated the trade landscape, but also potentially jeopardised the food security of the region’s poorest consumers.

Food and agriculture in MENA

Like many parts of the developing world, growing populations and incomes in the MENA region have rapidly driven urbanisation and the emergence of a middle class, leading to rising demand for food and evolving preferences for different and new foods. Over the past 50 years, calorie consumption has risen substantially, but the percentage of those calories coming from cereal grains has fallen while calories from meat have more than doubled. Wheat and rice consumption have remained flat while poultry and beef have grown.

The trend towards rising meat and dairy product consumption is a common occurrence in developing and emerging economies. At the same time, the MENA region’s ability to produce the crops and livestock needed to meet that demand is limited by its geography and climate. Across most of North Africa and stretching into the Arabian Peninsula, vast deserts cover the land, with small arable pockets concentrated in the same areas that comprised the original Fertile Crescent. Average rainfall levels for the region are not only among the world’s lowest but also highly variable, contributing to low yields that rise and fall unpredictably in areas such as Morocco.

The main exception is Egypt, where irrigated production leads to high yields, but limited arable lands keep overall production low. Whether due to low yields or limited arable lands, countries in MENA consequently rely heavily on imports to satisfy their food demands. MENA imports account for a large share of globally traded food commodities. The United States shipped about $10 billion worth of agricultural goods to the MENA region annually in 2011-13, accounting for about 7% of its total agricultural exports. The most important US grown commodities exported to the MENA region are tree nuts, grains and feeds, and horticultural products. Major destinations include Egypt, Turkey, Saudi Arabia, Israel, Morocco, and Tunisia. 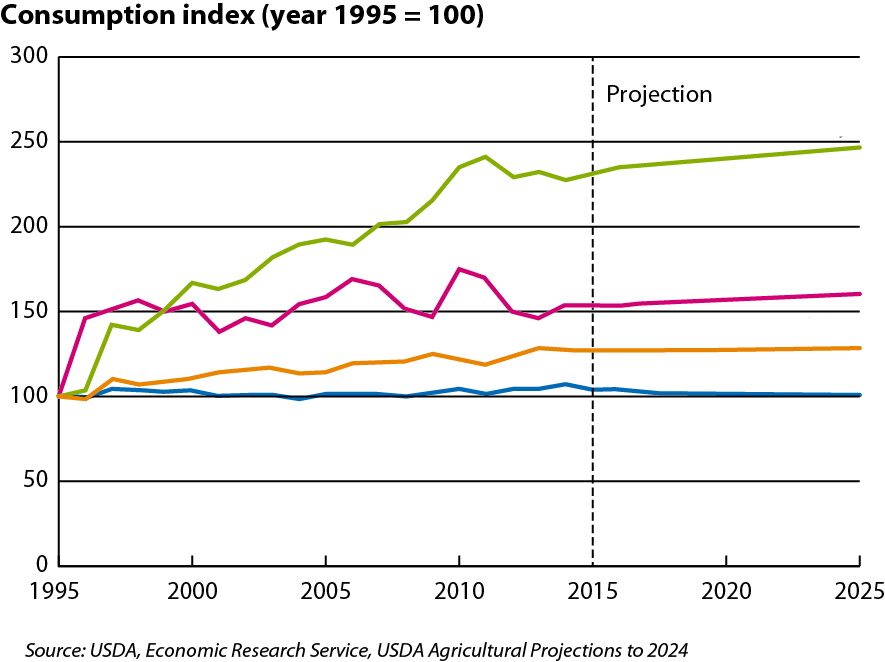 MENA poultry production has grown rapidly but has not kept pace with consumption growth, resulting in rising imports. In fact, MENA is the largest regional importer of poultry products in the world, and within the region, Saudi Arabia is the largest buyer. US poultry shipments, mainly broilers, saw rapid growth over the past 10 years, with the biggest customers being Iraq and the United Arab Emirates.

As the capacity for large-scale poultry operations has grown, so has the demand for animal feed, for which corn is a main ingredient. Corn is cultivated mainly in Turkey, Egypt, and Iran. While most production is irrigated, corn remains subject to the same climate and geography constraints that limit wheat production, leaving relatively little room for growth. MENA corn consumption has grown steadily over the past 20 years, primarily owing to growing poultry production.

Again, rising incomes are driving demand for poultry and meats, but whether this translates into more demand for imported feed for domestically produced poultry or imported poultry itself will likely vary within the region. Despite recent years of volatility, MENA soy products consumption has risen over the past 20 years, almost entirely due to rising demand for poultry and other meat products. Demand for soybean and soymeal imports varies across the region, depending on each country’s domestic crushing capacity. Egypt’s government-protected domestic crushing capacity orients the country’s import demand towards soybeans, while other markets in the region purchase U.S. soymeal.

Figure 3 –  Poultry and beef imports in MENA continue to rise. 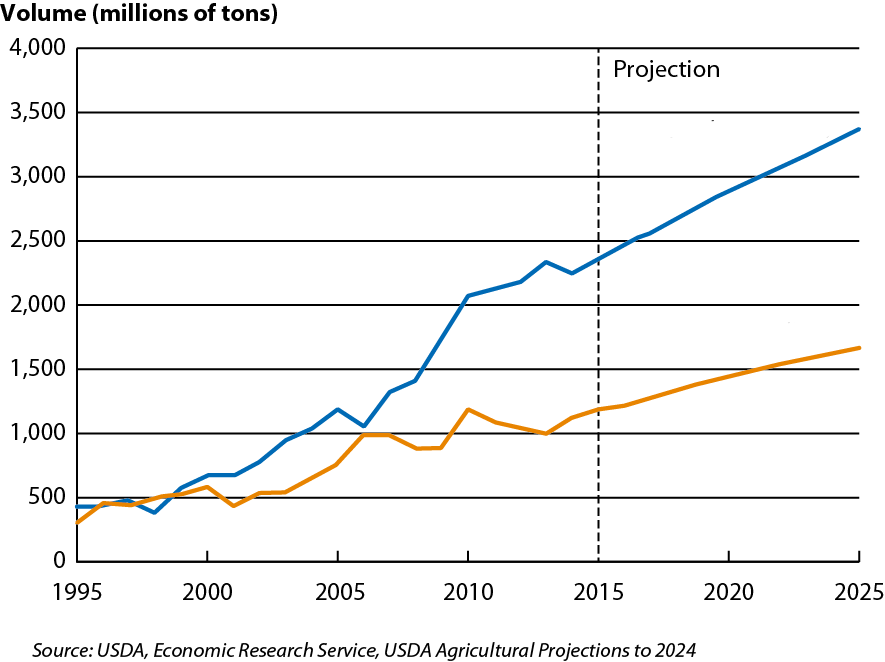 Connecting the dots at VIV Europe