The Dutch duck farmer Erik Staal spends a lot of time making sure his animals are of high quality and ?uniform. This is why he receives the maximum quality premium of 3 cents per kilogram from the Cooperation VSE.

Peking duck is relatively unknown in the Netherlands. The average Dutch person will eat around 200 grams of duck meat per year. The animal is sold as a whole duck or divided into, for instance, (smoked) chest fillets, ham or thighs. The duck season starts about halfway through September and lasts until Easter. During the summer months, very little duck is consumed. In Germany and France, among other countries, the market for duck meat is much larger. At least 90% of slaughtered Dutch ducks are exported and are known as absolute quality products.

Duck farming is a small sector in the Netherlands. VSE and Tomassen Duck-To are two integrations, which on a yearly basis produce around 9 million ducks. Tomassen Duck-To has the largest factory, with a maximum capacity of 22,000 animals per day of slaughter. VSE slaughters between 70,000 and 80,000 ducks per week and wants to increase the inflow of ducks meant for slaughter. Especially now that the cooperation is halting slaughter for a Danish integration, VSE is looking for entrepreneurs with barn space for ducks. “Despite the fact that the market price is not fantastic at the moment, we see good opportunities in duck farming. By striving for qual-ity, cost-efficiency and product development, we expect to be able to pay our duck farmers a handsome amount.” The duck farmers who provide ducks to VSE are independent entrepreneurs who work based on contracts. “We sell chicks that are a day old and buy back grown ducks,” says Nijboer.

VSE works with forty duck farmers, including Erik and Roelie Staal in Ermelo. If Nijboer has his way, these men will soon have several colleagues. “We have enough space for 5 to 10 extra suppliers, depending on the available barn space,” the VSE-integration manager says, as he points out the advantages of keeping ducks. Ducks are easy and strong animals. Broiler houses often need no adaptation to hold ducks. Antibiotics are next to unnecessary in the duck sector.

While VSE sees chances to increase their turnover and is looking for extra houses, Staal is hoping for better pricing. Including premiums, he now receives €1.07 for a kilogram of duck meat. For a long time, the price was €1.12. “By performing well technically and keeping a sharp eye on my costs, I can make some money. The price is still not near my expectations however,” says Staal.

Since the beginning of this year VSE has been working with a premium quality varying between 0 and 3 cents per kilogram of meat. Independent quality control staff in the slaughterhouse judge the ducks on cleanliness, their feathers, damage, the quality of the sole of the foot, general health and uniformity. “Since we started working with premiums, we have seen a rise in the quality of slaughter,” says Nijboer. According to the integration manager, this is becoming more and more important. According to him, ducks from competing countries like Poland and Hungary are not up to Dutch standards of quality. “Customers choose quality and are prepared to pay for it. This is where we can beat the competition,” Nijboer says, and points out that VSE wants to reach out to new duck farmers by offering a guaranteed price.

Staal is given the highest premium. He focuses on quality and is not afraid to perform a strict selection at the beginning of the round. This way, he removes potential sources of disease and works towards a uniform stock. At the end of the round, this pays for itself. “Selection is necessary. If you do not perform a proper selection, you are being economical in the wrong sense of the word.”

The premium quality is a hot item among duck farmers. It is an incentive to perform better, according to Staal. “If you touch a farmer’s wallet, he will wake up,” says the entrepreneur whose business, according to Nijboer, is in prime condition. “Erik provides quality.” The duck farmer takes the compliment in a sober manner. “I just want to provide quality ducks. If you’re good to the animal, the animal will be good to you.”

Staal works with ducks of two different ages. This way he uses the room in his houses in an optimal manner. Every four weeks, 12,500 one-day-old chicks are delivered. The chicks are put into a raising barn, where they are divided into three groups. After three weeks, Staal drives the animals to the fattening stables . There are no problems there. Ducks have a great capacity for walking. Before changes in the environmental legislation, Staal kept his ducks outside part of the time, but that isn’t allowed anymore under the new government rules. In the fattening barns, Staal keeps seven animals per square metre.

A round takes between six and seven weeks, depending on the season. During the winter, the animals grow a little faster. The target weight for a Peking duck is 3.1 kilograms.

The animals need a new layer of straw every day. Staal uses a kilogram of straw per duck every round. Laying down the straw is done semi-automatically, using hoses. “Straw is a cost some duck farmers used to save money on. This was evident in the slaughter. Since the premium quality, visibly more straw is being used and ducks are much cleaner on delivery. The average premium paid is 2.5 cents per kilogram,” says Nijboer. 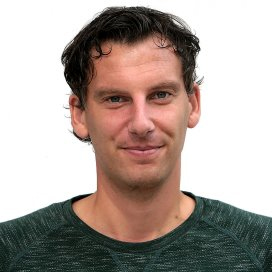 Accelerating the genetic selection in ducks