4 main aspects of turning hatching eggs have been identified as being integral to the ultimate success of incubation. This article in a series, will focus on the turning frequency during incubation.

Early observations of feral chickens suggested that a brooding hen turned her eggs as often as 4 times per hour (96 times daily) during early incubation but modern incubation technology has settled on the more convenient once per hour (24 times daily).

Increased turning has positive effects. Under practical conditions if eggs were not turned (NNN in Figure 1) versus normal hourly turning (TTT in Figure 1) in a modern incubator it would be expected that there would be negative impacts on embryonic mortality, malposition II (head in small end of egg) and hatchability. 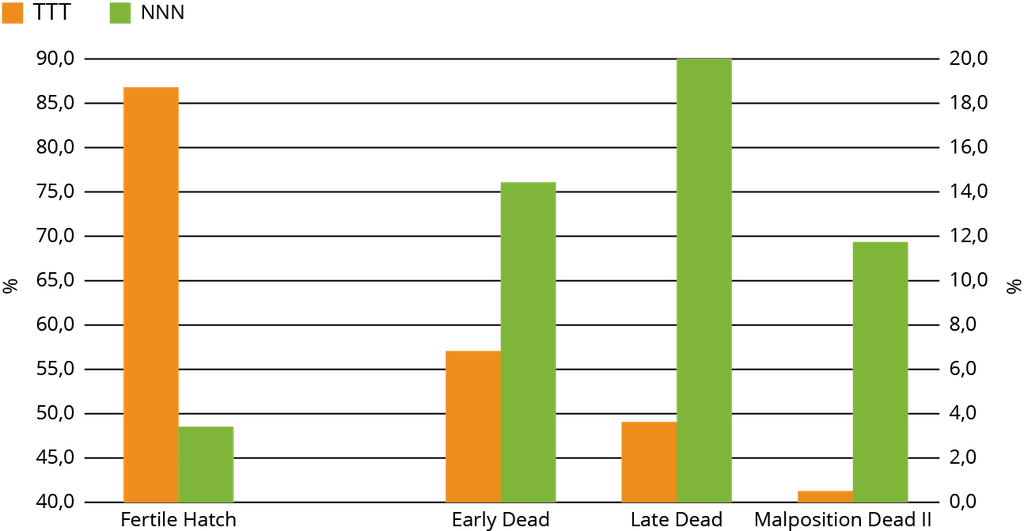 It was shown that the most critical time for turning was the first 2 days of incubation. The first 2 days of incubation has often been the time when eggs were not turned correctly because activating the turner was simply neglected after setting the eggs. This problem can be ameliorated by simply turning more frequently once the problem has been discovered. As shown in Table 1, turning these initially unturned eggs 96 times per day decreased the incidence of malposition II and increased the hatchability of fertility as compared to turning 24 times per day. The second most critical time for an absence of turning was found to be from E3-E7. Again, the resumption of turning at the 96 times per day rate improved the fertile hatchability and reduced the incidence of Malposition II (Table 2).

No differences in fertile hatchability

Given that there was a beneficial effect from the increased frequency of turning (96 versus 24 times daily) a series of studies was conducted to determine if there was a time period during early and middle incubation when turning eggs 96 times per day was more beneficial relative to other time periods. Eggs from flocks at 34 and 37 weeks of age (younger) as well as 59 and 61 weeks of age (older) were subjected to turning frequencies of either 24 (24X) or 96 (96X) times daily from start of incubation to 8, 10, 12, or 14 d of incubation. There were no differences in overall fertile hatchability irrespective of the day of incubation that turning was discontinued (range was 88.9%-89.2%), which indicated that turning could be discontinued as early as E8 of incubation, under the conditions of these experiments, without ill effect (Elibol and Brake, 2004).

Read all the latest articles from Poultry World issue 4, go to Digital Magazines and log in with your current website login. The magazine is also available to download from ITunes, Amazon, Metro and Google.

World Egg Day celebrates the value and versatility of eggs

The effect of light colour and changes on egg production