When consumers consciously buy organic eggs, they assume that they are sustainable, too. To underpin this idea, Noble Foods Purely Organic range applies for carbon-neutral status certified by the Carbon Trust. Organic layer farmers, Rob and Sally Nicholls, fully embrace the scheme as it makes sense on both the climate action and profitability fronts.

Poultry has been part of Rob and Sally Nicholls’ life for as long as they can remember. For years they had a business in poultry house cleaning and serviced both layer and broiler operations. Somewhere at the back of their minds, the layer business appealed to them. Some 26 years ago, the opportunity to start their own farm presented itself when an estate in the rolling hills of the beautiful Lincolnshire Wolds came up for sale in 3 parts. 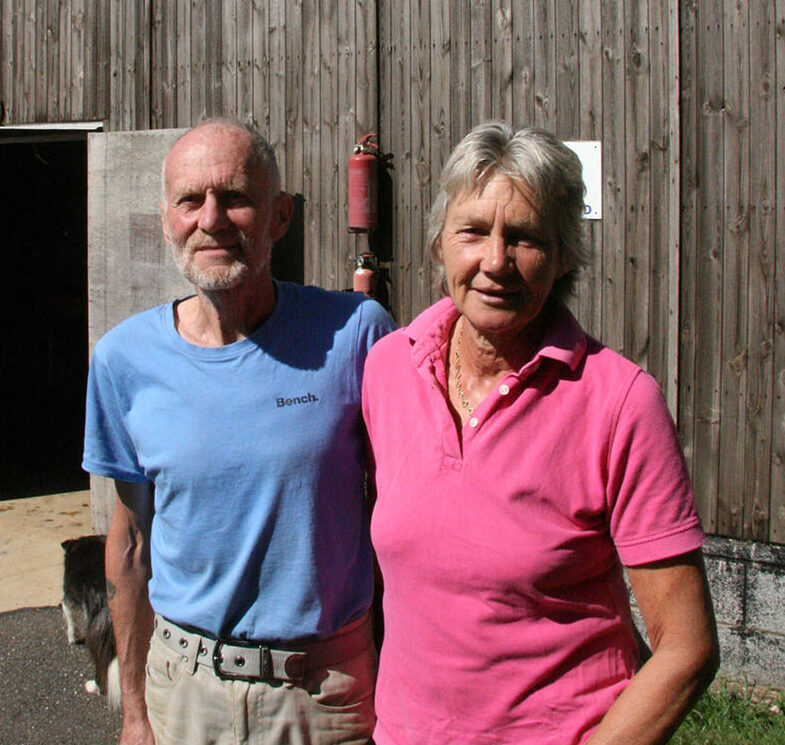 Profile
Rob and Sally Nicholls run a 7,000-bird organic layer farm in the UK. From Ings Farm in Belchford, they are one of 13 farms supplying the Noble Foods Purely Organic range.
They currently house a Lohman Brown dual-age flock, achieving a laying percentage of 96% at 26 weeks and 82% at 74 weeks.

“We were fortunate to be able to buy 1 small lot of arable land with a house on it,” says Sally. It was the place for the couple to combine a new business with their passion for horse breeding. The arable land was converted to pasture and the existing barn was used for free-range layers.

Up until 2002/3, mobile poultry houses were added to the operation and the couple applied for organic certification. “The conversion from free-range to organic wasn’t that complicated, but it gave us the opportunity to tap into an interesting market with added value. As our farm only houses 7,000 layers, maximising revenues made the most sense,” says Rob.

Roaming freely in what grew into a proper wooded area planted over 2 decades ago, the Lohman Brown layers are presented at their best. Performance is on par with the current (dual-age) flock achieving a laying percentage of 96% at 26 weeks and 82% at 74 weeks.

Rob: “These birds really suit us. They lay consistently, are nice and calm, and deliver good average results. Mortality is a little on the high side, but I wouldn’t trade them for birds that are stressed out more easily.”

The Nicholls farm escaped most of the avian influenza prevention measures. Housing orders were in place for some time, resulting in the use of extra bedding material and in-house manure production. “With organic manure in short supply, we get £12 (€ 12.60) per tonne for it. Having more is never an issue,” Rob laughs.

“I do have to admit that the bird flu situation this summer is a cause for concern,” he adds. “We are fortunate that it didn’t hit us directly, but the virus is becoming more and more endemic in the UK. That’s why we signed up for the Noble Foods avian influenza insurance scheme. In the event of an outbreak, we will have a little more security on top of government reimbursements of direct damages. That gives some peace of mind, although we do everything possible to limit risks with heightened biosecurity.”

Disease awareness at the Nicholls farm goes beyond the farm boundaries. “Despite the fact that we are surrounded by arable farmers, there are quite some chicken farms in the vicinity, both layer and broiler operations,” says Sally, explaining that the layer farmers form quite a close knit community. “We call each other on a regular basis to coordinate steps taken on the farm. One specific thing is that we discuss IB vaccination, for instance. We want to be on the same page on vaccine strain and timing, because that can benefit us all.”

Together with 13 other organic layer farms, the Nicholls produce for the Purely Organic brand of Noble Foods. Rob: “Over the years we have witnessed a growing demand for organic eggs. That said, there have been some fluctuations in growth. Especially in times of economic uncertainty and pressure on disposable income, market growth stalls. We saw that in 2008, and I expect an effect of the current cost of living crisis, too.” He continues: “I believe that consumers choose organic eggs for a reason. They want to be more sustainable, and it is up to us to live up to that expectation.”

Noble Foods has taken its responsibility as a market leader seriously, and plotted its CO2 footprint across the whole production and packing chain. “Of course, this was just the first step in becoming carbon neutral,” says Evans. “CO2 reduction is the name of the game, and that is top of mind in every chain of production.”

According to Noble Foods, the footprint of feed can be reduced by sourcing locally-produced feed ingredients or changing the raw materials associated with feed so those that have the largest CO2 footprint are substituted, if this is technically feasible. In terms of reducing CO2 emissions through energy efficiency measures, the company will be installing sub-metering at its largest packing centre to monitor and manage its largest energy users, undertaking compressed air leak detection regularly to detect leaks in the pressurised air systems running the packing machines to reduce losses, as well as completing lighting and heating upgrades to improve energy efficiency. In addition, Rob and Sally have installed 30 kilowatts of solar panels to offset their farm’s energy consumption.

Evans continues: “While our organic farms in the UK focus on sustainable practices and improving local biodiversity levels, we needed to find a solution that had a much larger impact on reaching zero carbon emissions.” The solution Noble Foods found is known as carbon offsetting. “The benefit of carbon offsetting is an immediate, large-scale impact on balancing the carbon emissions we create,” says Glenn.

“Many brands and companies decide to offset in this way because of its positive impact, but it does come with costs which are then used to fund offsetting projects. Our offsets support a renewable wind project on Lake Nicaragua, with additional community benefits.”

Noble Foods realises that carbon offsetting is only part of the solution. Glenn: “We are committed to reducing our carbon footprint year-on-year, which is an important and necessary step in achieving a carbon-neutral status with the Carbon Trust.”

Sally and Rob hear that the carbon-neutral status resonates well with consumers. Rob: “Venturing into the organic market added value for us but, in the end, it’s a conscious choice for environmentally-sustainable production, too.”