Microorganisms, such as bacteria, fungi and parasites, can develop resistance against antimicrobial substances, such as antibiotics, antifungals and anthelminthics. In recent years, microorganisms have been isolated that have developed AMR against a wide range of medically important drugs. As such, these ‘superbugs’ become an increasing threat to human and veterinary healthcare.

In this context, special attention is given to several strategies aiming to minimise the need to apply antibiotics to food animals, such as an increased focus on veterinary support, biosecurity measures, production management and nutritional interventions, including the use of functional feed additives. Indeed, certain feed additives can have a beneficial effect on gut health and performance in animals, thereby providing an alternative for Antimicrobial Growth Promoters (AGPs) and reducing the need to routinely use veterinary drugs applied to tackle enteric infections.

Determining the correct mode of action

However, it should be pointed out that the antibiotics and additives have very different characteristics, which has consequences to their proper application. Often, when animal producers are faced with the need or the wish to reduce AGP supplementation for the first time, several of them might feel tempted to look for ways to remove the antibiotics in the feed, just to replace them by other active ingredients, which they hope, will have the same effect.

Similarly, some producers that want to minimise veterinary interventions, might try to apply feed additives as a way to cure an upcoming disease, expecting they will act in similar ways as the drug. These approaches, however, deny the fact that additives have different modes of action compared to antibiotics, and that thorough understanding of these mechanisms is needed to use them in an optimal way.

To illustrate this, in Figure 1, some of the modes of action of AGPs/antibiotics and gut health promoting feed additives are listed. Typically, some mechanisms are overlapping, while others are distinctive. As a consequence, high-quality feed additives can be used to reduce dependency on AGPs: both products can be used in combination with each other, to provide a wider range of routes towards better health and growth. Alternatively, when the use of AGPs is forbidden or needs to be restricted, gut health promoting additives will be needed to fill this void and to deliver alternative pathways to boost animal performance.

Figure 1 – AGP’s and gut health promoting feed additives have modes of action that are partially similar, and partially different.

Below, some examples are given on how a precision delivery coated butyrate (PDCB, Adimix Precision) can reduce (the consequences of) intestinal colonisation by certain bacterial species, by triggering eukaryotic and prokaryotic signalling, rather than by killing these bacteria as such.

In a model for necrotic enteritis in broilers, for instance, supplementing challenged birds with PDCB had limited effects on the enumeration of Clostridium perfringens in the intestinal tract. However, PDCB-treatment birds had lower necrotic lesion scores (Figure 2). These results are in line with the hypothesis that butyrate, when directly delivered in the intestinal tract, prevents or repairs intestinal epithelial damage, thereby limiting nutrient loss and inflammation and as such restricting conditions that would favour the intestinal overgrowth of Clostridium in later life stages. 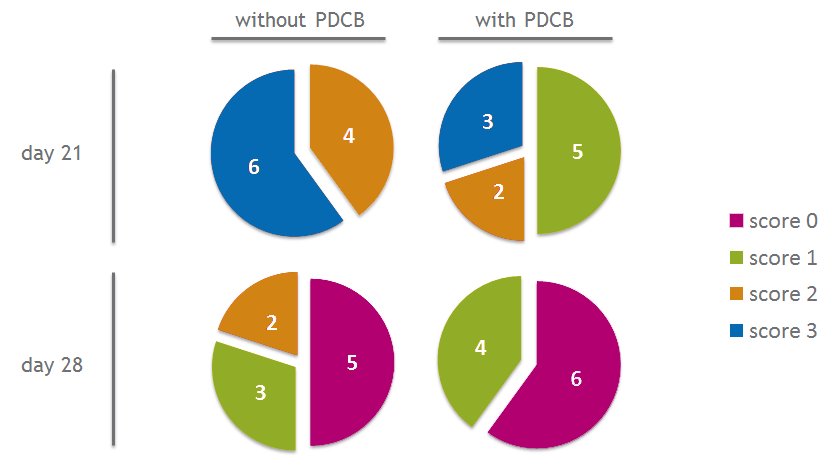 Similarly, PDCB can affect pathways in Campylobacter and Salmonella that will reduce invasion of epithelial cells, but it should not be used as an antibiotic drug to be applied in the final production stage only, in the hope to wipe out these zoonotic pathogens just before the animals are slaughtered. This is demonstrated by an experiment, where 0 or 3 kg/T of PDCB was added to several feeds of broilers infected with Campylobacter jejuni in the growing stage (Table 1).

When PDCB was added to all feeds, or from the moment onwards that birds where orally infected, caecal Campylobacter loads where significantly reduced compared to birds from the control treatment. However, inclusion of PDCB in only the starter feed and/or the finisher feed had a less profound impact on caecal Campylobacter counts.

In conclusion, antibiotics, whether applied as drugs or AGPs, can exert a specific and direct effect on enteric bacteria. The downside of this approach is that bacteria can build up resistance against certain drugs, jeopardising future treatment of humans and animals with antibiotics. Functional feed additives such as butyrate do not cure acute bacterial challenges, but prepare the gastro-intestinal tract of animals as good as possible to overcome negative consequences of certain diseases in a later life stage. As such, feed additives like butyrate can be a safer way of raising animals with less antibiotics.