Using positive biofilms to manage the microbial environment of poultry

Every time new broilers enter a barn biosecurity measures impact the level of microbial pressure. Integrating a protective biofilm approach has been shown to be an effective tool to complement these measures, by helping to instil a positive microbial environment after the disinfection step.

Micro-organisms are everywhere. In farm buildings, all surfaces – floors, walls, ceilings and equipment – are colonised by micro-organisms, mainly in the form of biofilms. They can be harmless, positive or negative for animals, humans and even for end products if they contain undesirable bacteria. Before a new flock of birds enters the building, cleaning and disinfection are necessary. However, surfaces do not remain sterile. Micro-organisms carried over from the animal environment and from the new birds themselves quickly start recolonizing the surfaces, forming biofilms. These micro-organisms may be undesirable bacteria or potential pathogens.

About 90% of the bacteria biomass on Earth is organised as biofilm. In nature, most bacteria do not live as free-floating cells. Instead, they are arranged into complex communities known as biofilms. A biofilm is defined as ‘a community of micro-organisms fixed to a surface’. They secrete a protective extracellular matrix which can represent 85% of the biofilm biomass. Biofilm formation is a dynamic and evolutive cycle that consists of three main stages: attachment, development (and production of the extracellular matrix) and dispersion.
A biofilm can be formed by either beneficial (i.e. positive biofilms) or undesirable (i.e., negative biofilms) bacteria. It is important to note that the properties of bacteria in a biofilm are very different from those of the same bacteria in their free-floating, or planktonic, form. A major concern is that some pathogenic bacteria in a biofilm form can be 10 to 1,000 times more resistant to antimicrobials or disinfectants compared to isolated bacteria.

What if beneficial bacteria were applied to building surfaces and equipment right after cleaning and disinfection? If they could grow into a positive bacteria biofilm inside the building, that would leave less room for negative biofilms to develop. This is the basis of the ‘positive biofilm’ concept; a new approach to biosecurity management. It comprises 3 main steps: cleaning, disinfection and the application of selected bacteria that will form a positive biofilm.

Farm trials and in vitro studies have shown the potential for this new approach as part of the hygiene management toolbox. To develop a positive biofilm solution, Lallemand Animal Nutrition selected bacteria strains for their ability to form a biofilm and rapidly occupy the environment. The positive biofilm formed by the selected bacteria rapidly takes up the empty space on farm surfaces: in vitro testing showed 90% of surface coverage within 12 hours, leaving less room for unwanted bacteria. The selected bacteria were formulated into a specific adhesive blend that can be sprayed onto both vertical and horizontal surfaces.

Further in vitro studies were conducted at the Laboratory of Molecular Epidemiology (LEPIMOL), School of Veterinary Medicine, at the Federal University of Uberlandia, Brazil, to study the effect of the positive biofilm solution on the recolonization of various micro-organisms (Salmonella gallinarum, S. heidelberg, Campylobacter jejuni and methicillin-resistant Staphylococcus aureus, or MRSA) on different types of matrices: polystyrene plates (representative of poultry housing equipment surfaces) and litter materials (soil and wood shavings) as the product is applied on farm after the building and litter set up has been installed. The study showed that each micro-organism grows differently according to the material (Figure 2).

Depending on the material, S. Heidelberg and S. Gallinarum did not grow or showed limited growth when the positive biofilm solution was applied 24 hours before the contamination. In all cases, 48 hours post-challenge, the pathogen counts were significantly lower on all pre-inoculated materials. This in vitro study demonstrates that establishing a positive biofilm, after the cleaning and disinfection of surfaces or litter material, can help to reduce the recolonization of undesirable micro-organisms that may be common in farm buildings, litter material or even carried by the birds entering a barn. 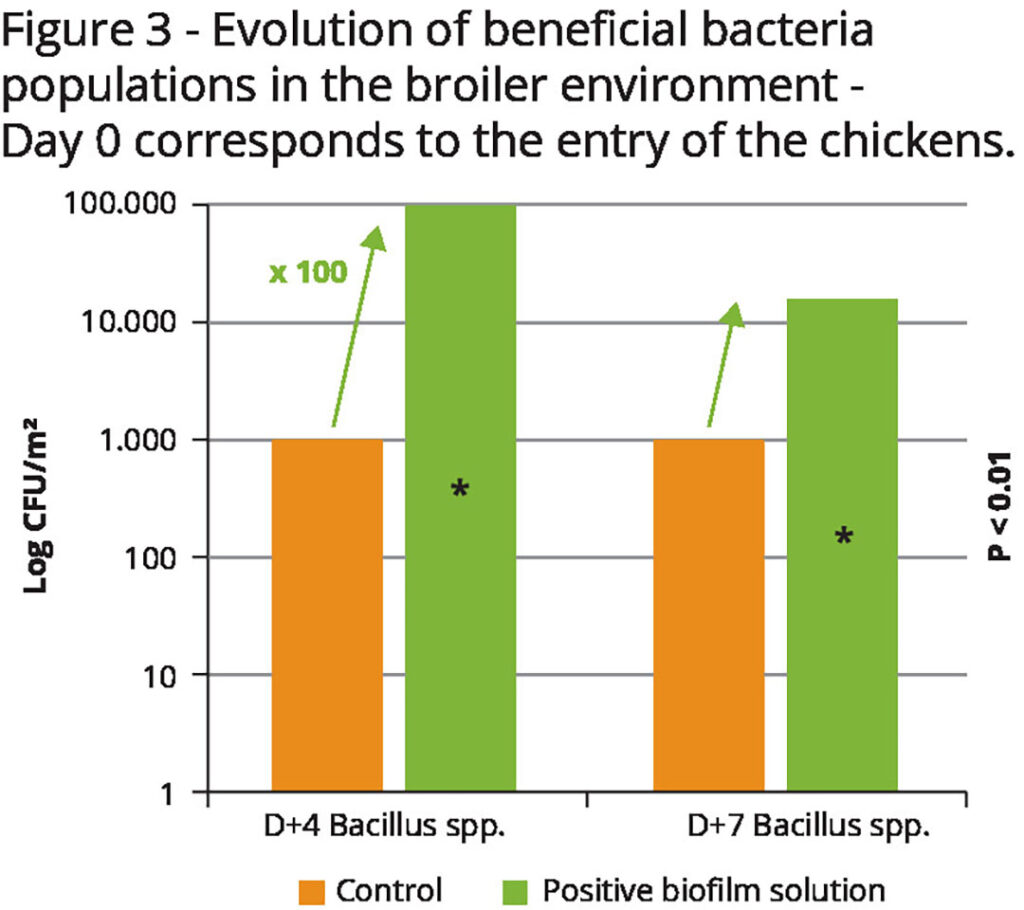 By creating positive biofilms, this bacterial solution helps to maintain a safe microbial environment in poultry barns, as shown by reduced mortality and culling rates. In conclusion, farm biosecurity measures – including cleaning and disinfection – impact the level of infection pressure before new animals enter the barn. Integrating a positive biofilm approach has been shown to be an effective tool to complement these measures. This has been demonstrated in commercial farm settings where it was used to improve the microbial environment, resulting in a positive impact on animal health and improved production performance.

In today’s One Health context, ensuring a safe microbial environment throughout the production cycle is a necessity and new approaches to biosecurity that combine disinfection with a practical microbial ecosystem management system look very promising for poultry production.